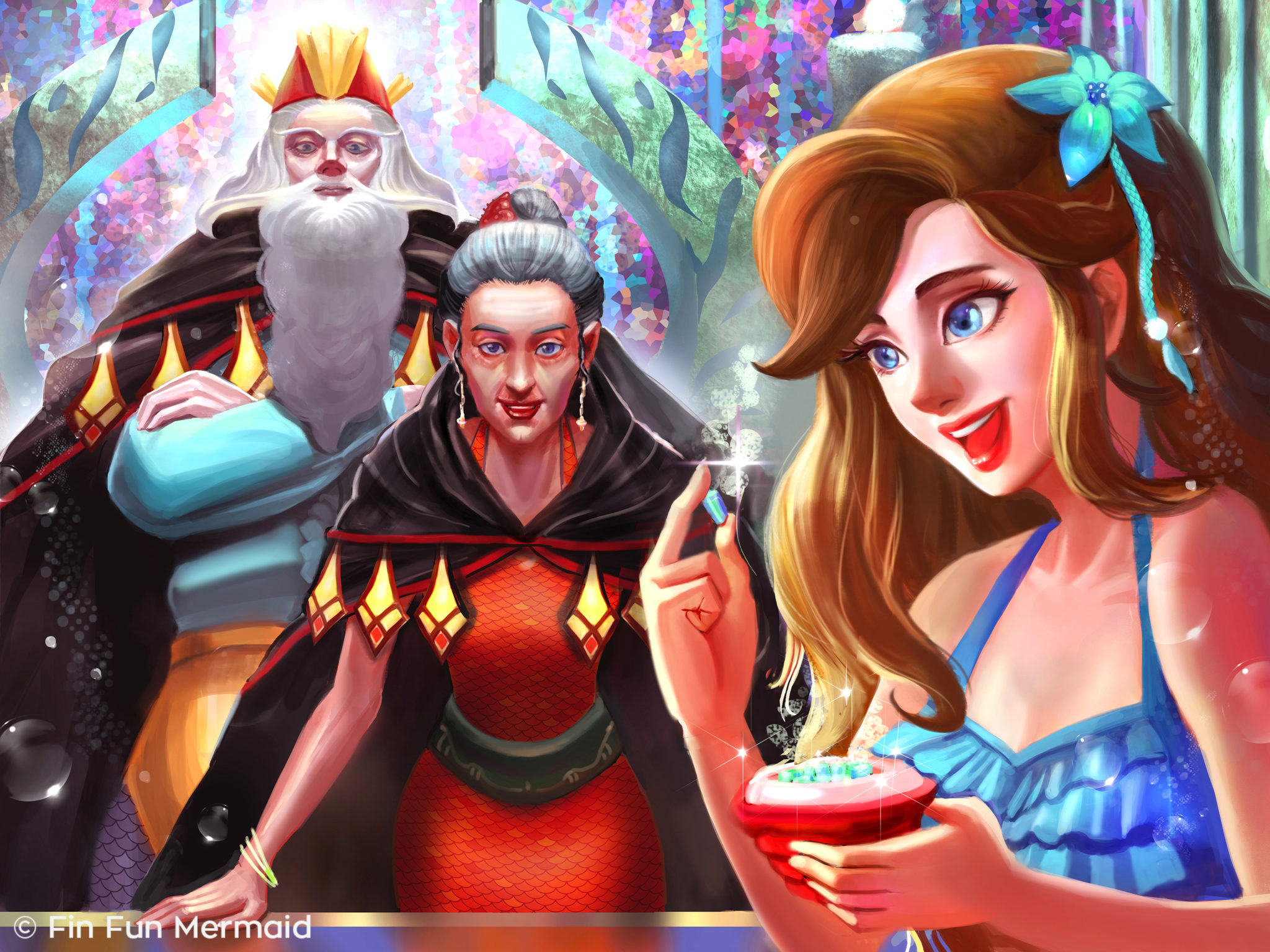 As my parents marched me through the great echoing halls, I felt chills up my spine at the thought of being part of a secret meeting. I’d never been part of a secret anything! Mostly because I have a big mouth and merfolk don’t like to trust their secrets with jaw flappers like me. But I can be good at keeping secrets! I’ll show them, I thought with a smirk.

“Hurry up Zoey,” my mother whisper-yelled at me. I nodded repentantly until she turned back around and then I grinned. I didn’t know why she didn’t just talk in a normal voice. It was an outrageous time of the night and no mermaid or merman was likely to be awake or remotely interested in what we were doing. What are we doing? I thought to myself, reminded of my frustration the night before.

Destiny had come barreling in the room after her ‘near-death experience’ with MerCouncilor Raine, as she described it. After some dramatic theatricals, we finally fished what happened out of her and immediately scattered to tell our parents. Obsidian—who we all (except Crystal, of course) agreed was a complete dreamboat—for some reason didn’t like the idea of seeing his father and decided to crash in that room for the time being instead. Crystal seemed reluctant to leave him but decided she couldn’t change his mind, so she finally agreed.

This morning, we’d all been dragged downstairs with our hair shining and our tails sparkling. In front of the entire merfolk population, or most of it, the MerCouncil’s final decision had been announced: the first-born Mermaiden from each of the Seven Seas would act as an ambassador for her kingdom and attempt to connect with the humans in an effort to protect both worlds from further dispute and to establish a deep bond between the two races. I remember my stomach had leaped into my throat as I floated there hearing the thundering applause of thousands of merfolk showing their approval. And I think Serena started it, but suddenly all of us Mermaidens were holding hands and drawing strength from one another. In that moment I swear I felt ten years older.

Lost in my memories, I nearly plastered my face in my dad’s back before I realized we’d stopped moving. The doors to the MerCouncil room stood in front of us, seeming as menacing as ever. Along the edges, there were tiny crabs and other sea creatures carved into the golden doors. I wanted to lean in close to them and use my gift to tell them to move. I’ve never tried using my power on inanimate animals, but the more I thought about it the more I wanted to try! Just as I was reaching out to touch one of the more alive looking seals, my dad gave a long drawn out knock on the door.  As it went on, I realized it was a code! One long, three rapid short, four normal, three long. I tried to memorize the pattern as the doors swung open and we continued inside, but my brain doesn’t work like Destiny’s, who could probably repeat, sing, and create an impromptu dance to the rhythm without even hearing it twice.

My parents and I made our way to our seats, and it looked like we were the last to arrive. There were whispered conversations amongst the other royal families that quickly died down once they realized we were all present.

When Darek began to push himself up from his seat, he looked older in the pale light than he had when we’d first arrived weeks ago. It dawned on me that the whole decision had taken a lot out of the old merman. Many of his fellow Councilmembers, I noticed at that morning’s ceremony, also resembled his haggard appearance. Some were young, only a few years older than myself, while some were nearly as old as Darek. Strangely, the only other Councilmember in attendance tonight was MerCouncilor Raine, which seemed very odd. So this really was a top secret meeting! Even from all the other Councilmembers…

Darek took his time to rise from his seat as we all settled down. Then he leaned forward and steadied himself on the rim of the stone table. We sat there so long I thought I was going to explode from the tension until finally he straightened up and smiled at us all. He really has lost his mind, I thought, bewildered. Darek never smiles!

“I apologize for my fellow Councilmembers’ absence tonight, but we concluded this would be the easiest and safest way of holding this particular meeting.” Darek paused briefly and sighed heavily before proceeding. “MerKings, Queens, and Mermaidens of the Seven Seas, this Council is indebted to you. We have struggled for decades over the decision to make ourselves known to the Human World, and we now believe we have made the right choice. We owe it to you: to your selflessness, your integrity, and your willing hearts. We thank you for your service to your kingdoms and to the entire MerWorld. Furthermore, we know we can trust you to be our voices in contact with mankind.” As he continued his speech, he looked directly at each of us Mermaidens in turn. “It will be difficult at times, and some merfolk might not agree with what you are doing, but you must learn to put aside your doubts and fears and insecurities. You are Mermaidens! You have tremendous potential and the capability to do wondrous things. If you are determined and successful, you can change two bitter worlds into a new and beautiful masterpiece.

“To help you in this endeavor, we have crafted a gift for each of you,” he continued, as MerCouncilor Raine began to circle the table, presenting each of us Mermaidens with a small box. She handed mine to me and I quickly found the latch and swung it open. A large cream clamshell was nested inside among a patch of soft algae to keep it safe. I stared in wonder at the gift and looked around the table at each of the other girls doing the same. My parents peered over my shoulders and I felt my Da slip his rough hand on the back of my neck and rub it. It was something he’d done ever since I was a little mermaid and it always calmed me down.

As I reached into the box to remove the shell, my imagination went wild, sifting through my many ideas of what might be inside. I paused, nearly expecting Cooper to come flying out of nowhere to attack my hand with his vicious little flippers and insist on getting a front row seat, but my pesky yet adorable little turtle friend was tucked up into my room. He’ll be so excited to be going home tomorrow he’ll be insufferable for a week, I though fondly. With a flick of my fingernail, I opened the clamshell and took a sharp breath. Inside were twelve glittering turquoise stones, the size of my pupil. They matched my tail perfectly! I looked up at Darek in awe as I heard Waverlee squeal in delight, Serena gasp, and Destiny laugh enchantingly.

“Remember, Mermaidens,” Derek went on, “these stones will enhance your powers, but you alone control your gifts. As you wear these stones, perhaps as a necklace or other jewelry, perhaps in your hair, they will give your talents a new strength. But beware. You must never use your gifts for selfish wants or desires. Instead, use them to build, encourage and help others. To keep peace with the Humans and to share the wonders of our world with them. When you are being selfless and compassionate, your powers will grow to a depth you can’t imagine. For this reason it is imperative that the true nature of these stones be kept secret from everyone beyond the walls of this room.”

My first instinct was to test just how strong my power would grow to, and then the realization hit me like a slap to the face. My life was changed. From now on, I wasn’t a young, carefree, fun-loving, teasing, game playing mermaid anymore. I was Zoey, Mermaiden of the Coral Sea, Ambassador to the Human World.

What do I do? I thought frantically. For in the first time in my life, panic took over my mind and I had no answer. 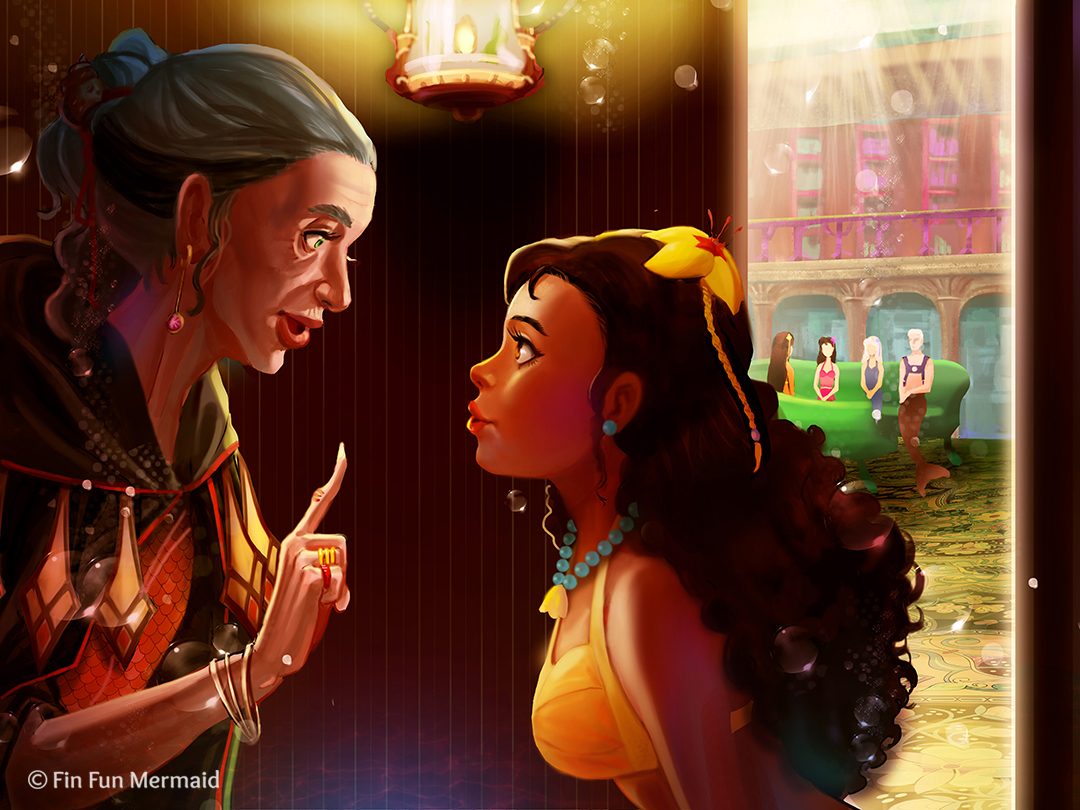 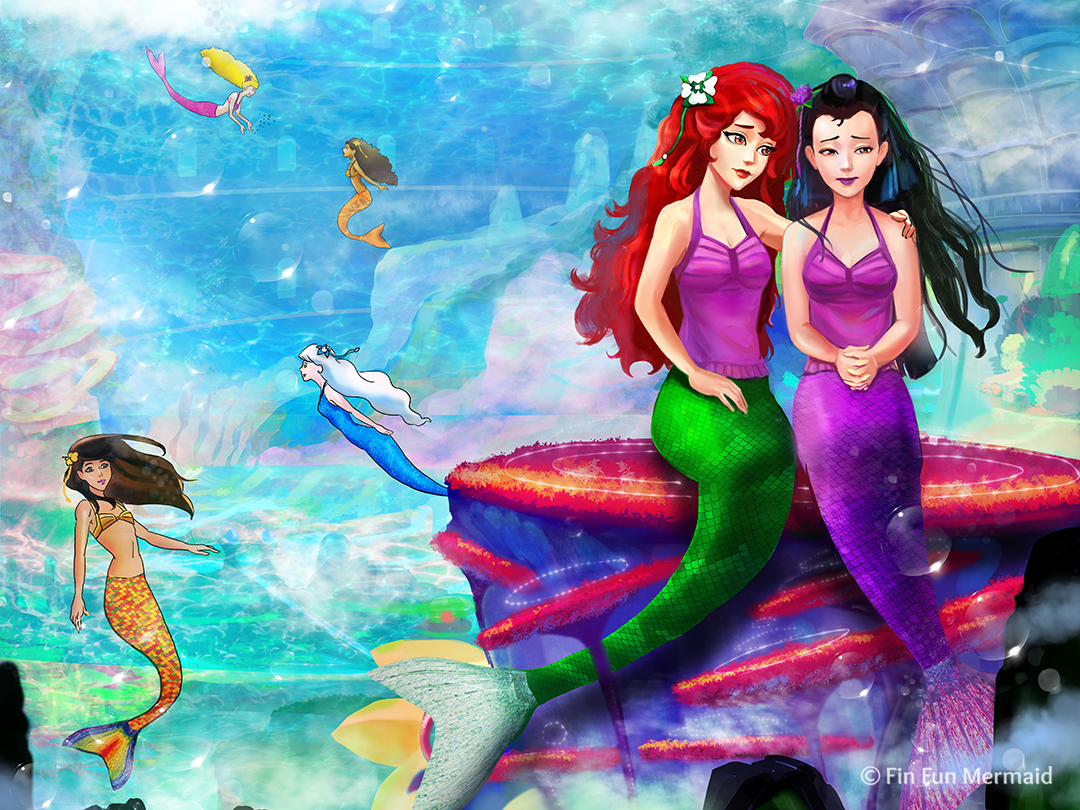