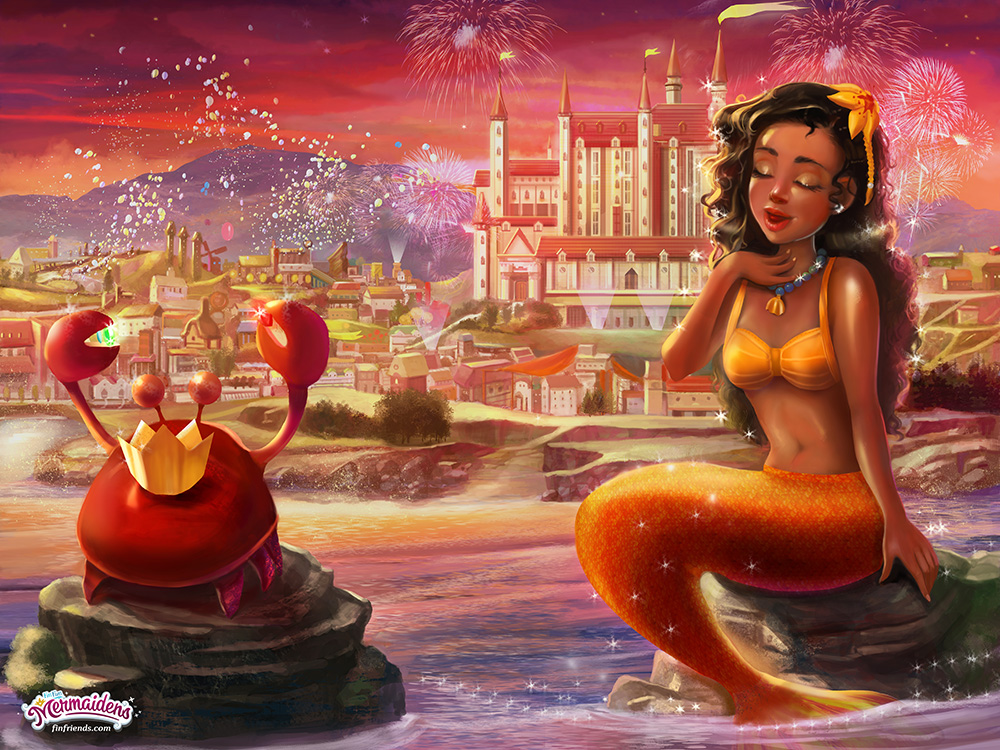 A Mermaid Story from Mermaiden Destiny!

Even before I was entirely awake, I could feel someone watching me. I heard scuttling across the wooden planks of the floor of my shipwreck hideout. I come here sometimes to keep my treasures and knick-knacks safe, but also to be closer to the human world with their music and dancing. I love it here. It’s cozier than it sounds and I have Frank to keep me company. 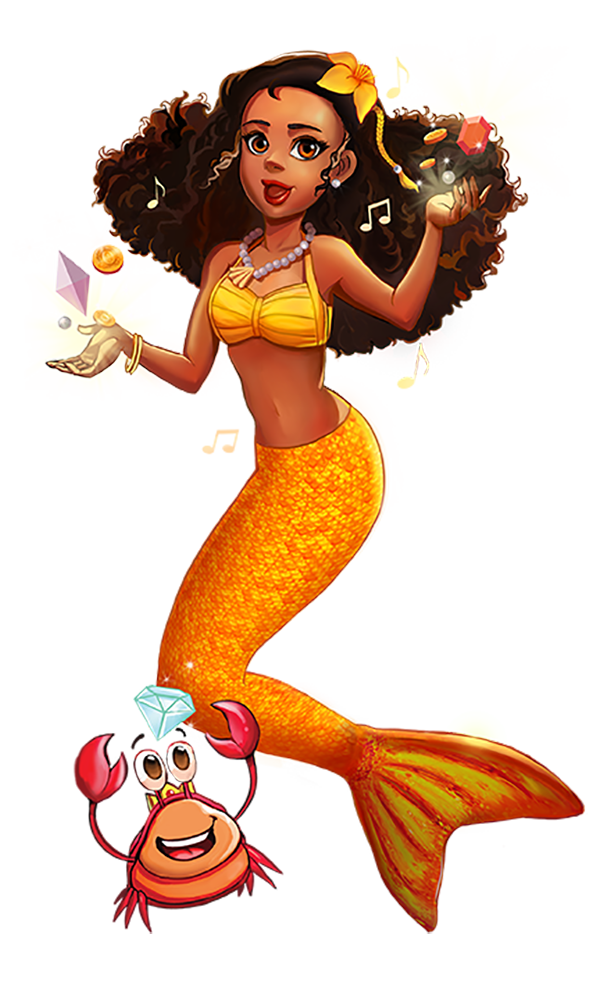 Speaking of Frank, I heard more scuttling on the floor, a little closer to my bed (which was really just an old bench—in what would have been the captain’s quarters—draped in seaweed). I also heard little grumbles and smiled to myself. Frank was always talking to himself. He completely denies it when I tell him, but we both know it’s true.

All of a sudden, I remembered what day it is! Today is the day I get to see the Caribbean Carnival! The carnival is a tradition in the Caribbean, where I live. During the carnival, people from many, many islands all over the Caribbean Sea come out into the streets and have huge parties! They play games and eat scrumptious food and, best of all, they make lots and lots of music! I absolutely adore watching all the humans laugh, sing, and dance through the streets. It almost makes me want to be up there with them!

I flung my seaweed blanket off of me and accidentally startled Frank. “Ahhh!” He shrieked and in one second he was inside of his shell, glaring out at me as I laughed. Frank, or François Crusteau as he likes to be called, is a small French crab. He’s also my best finfriend. He mainly follows me around to find treasure, but I know that he likes me enough to stick around even without it. See, my special power is finding things. It’s easy, really. I just sing a little song and the sound waves from my voice bounce off of the thing I want to find and my tail leads me right to it! It’s a great gift, but sometimes I almost wish I didn’t have it. I mean, I love being a princess and all, and helping people makes me feel great, but all I really care about is music! If I had it my way, I would do nothing but dance and sing all day long!

Anyways, Frank quickly popped right back out of his shell to give me a talking to. “Mademoiselle! I have told you a million times, over and over again! Do. Not. Scare. Ze crab! Ze crab gets scared, ze crab is not happy, and ze crab has pinchers! He will use them!”

“Oh, Frank!” I sighed dramatically with a dimpled smile, “You’re too sweet to pinch me! You couldn’t if you tried! But, since I did startle you, I promise to make it up to you. What do you want to do today?”

Frank still looked doubtful at my too-ready apology. Usually I’m not what you would call a “morning mermaid.” But then he smiled mischievously and I knew exactly what he wanted to do today.

“Yes, Mademoiselle. Treasure hunt! Gold! Silver! Shiny metals all for me!” Frank exclaimed while jumping in place. I smiled a little because I knew I’d made him happy, but it meant missing some of the carnival! I sighed and resolved to find Frank’s treasure as fast as I could.

Soon, Frank and I were on the hunt, speeding up a coastline we hadn’t been to before. I sang as I swam and smiled to myself as Frank danced on top of my head, winding his little legs through my long curly dark hair. I felt my power drawing me closer and closer to my destination. I sped up and zoomed across the water as fast as my orange and gold tail could take me. Finally, I felt my tail point me around a sharp turn in the rocky coastline that we were following.

Excited, I took the turn quickly. All of a sudden, I ran blindly into something. I shrieked as I went tumbling down onto the sandy sea floor. The odd material wrapped around me like a snake and in no time I was tangled in some kind of net! As I frantically twisted and flipped around, I only felt myself getting more stuck. I quickly stopped my thrashing but the damage was done. The ropes were hopelessly tangled all around my tail, arms, and neck. I was too afraid to scream in case the person who left this net here heard me!

Then I heard a familiar scuttling. Frank! I turned my head and saw him scuttling towards me.

“Destiny! Are you hurt, Mademoiselle? I was dancing and you were singing and then all of a sudden the crab was flying off your head and he was seeing you wrapped up in that net like an octopus and he was hoping you were not hurt! Oh, and I found the treasure! You were right again, Mademoiselle! It’s very shiny and…” Frank kept talking but I zoned him out. I needed to find a way out of this net! I was frustrated and a little bit scared. I didn’t know what would happen if I didn’t leave soon! I remembered my mother telling me a long time ago about human men who captured mermaids and used their powers for evil. I was suddenly very afraid that those stories were real.

As Frank kept talking, I glanced over at him and caught sight of his sharp, pointy little claws. I suddenly got an idea.

“Frank! Quick, come closer to me!” I beckoned to him with my head. He glared at me.

“François! Ze crab’s name is François!” He grumbled, but then he scuttled forward. I quickly pulled a rope as far as I could away from myself. “Now, Frank, slip your claw underneath this rope and squeeze down as hard as you can!” The doubtful crab did as he was told. The rope snapped easily! We laughed in relief and quickly Frank began to cut the net away. He slipped from rope to rope, snipping and cutting away as much as he could. In no time, I was pulling the last few ropes from my arms and tail.

Just as I threw away the last rope, I heard something coming from above us. It was a faint buzzing noise. I looked over to my left to see what it was coming from. Frank was behind me, searching through the small pile of treasure he had found hidden in a hole inside the rock wall beside us. I ignored his pleased chattering and looked towards the sound again. Then, I saw it. Way above us, a little figure on top of the pristine water raced along the surface in our direction. The water behind it was churning and swirling. It looked a little like those ships I see sometimes, but this one was much smaller and noisier. The sound grew louder and louder as the little shape got closer. 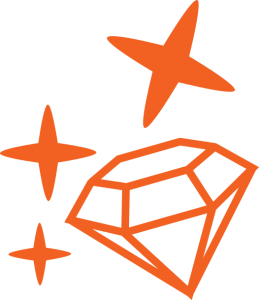 I didn’t want to wait to find out what the growing shape was. I let Frank gather up his treasure and then I grabbed him and placed him on my head again. We set off for home, too exhausted for any more treasure hunts.

That afternoon, I sat on an empty beach, carefully hidden behind some tall rocks. I smiled and gasped at the amazing display of the carnival. The dancers whirled around and around, whipping their colorful outer layers into the air. It was mesmerizing. And the music! I could have listened to it all night long. I danced and swayed along with the melody and even Frank put on a little show of his own.

We sat there as the golden sun began to sink beneath the waves. I remembered a story my father once told me of the sun. He had spoken of a mermaid who had lived once, whose only dream was to catch the sun and keep him from drowning in the deep ocean each night. Every day she would swim farther and farther in hopes of catching up to the golden orb. Finally, one evening, she set out earlier than she ever had before. Just as the sun was disappearing beneath the waves, she found him. She caught hold of one of his beautiful rays and from then on, to this day, they travel together, neither alone anymore. She carries him on his journey under the sea and he carries her through the sky during the day in a never-ending circuit.

I laughed to myself at the memory of my five-year-old self then wanting to catch the sun. As I gathered a sleeping Frank and his small bundle of treasure, I looked at the last of the disappearing rays of the sun and thought to myself, “Another day, sun. I will come for you another day.”