“Pepper, slow down!” I giggled. “You’re going to fall, silly little penguin.” Pepper was waddling as fast as his little feet could take him right on top of the long iceberg next to me. He turned his head to look at me and chirped happily. I couldn’t help but smile and sigh, watching him closer to make sure he didn’t take a tumble.

As Pepper reached the end of the iceberg he was racing across, I flicked my tail and another block of ice appeared. He hopped across the little gap between them and kept zooming forward. Making ice is my mermaiden power. I love it! It’s so handy. The only thing I could think of to make my power better would be the ability to melt ice, too. That way I could free the ships that get stuck in the harbor in the middle of winter, but I’m not complaining.

Pepper and I were on our way to make ice sculptures on our island. We’ve kind of claimed a little island out in the middle of the Arctic Ocean, where I live. It’s nothing special, but sometimes, when we can get away, we like to go there and experiment with my power. I make tons of icy sculptures. It’s like painting, but with ice. I squeeze my eyes shut really tight and think of what I want to make. Then, I flick my tail and there it is! Some sculptures take more time and energy, but others are really easy.

While I was thinking of what I wanted to create, I wasn’t paying as much attention to Pepper as I should have been. See, he thinks that since he’s a bird, he should be able to fly. I try to explain to him that he’s a special kind of bird and that his wings aren’t quite strong enough to lift him up, but he doesn’t understand. So I have to keep him out of trouble. He’s a handful, but he’s my best finfriend and he makes me so happy!

Anyways, Pepper decided just then to try to take a leap off of a high point on one of my icebergs. I looked up at him just as he came free-falling down in front of me, flapping his little wings as vigorously as he could. I quickly dashed forward,barely catching him in my arms in time. He flipped around playfully and I held him closer so he couldn’t escape.

“Pepper, you naughty little penguin, what did I tell you about trying to fly?” I scolded gently. He looked up at me and then focused on a piece of my long, white, wavy hair and started to nibble on it. I couldn’t help but laugh then. He trilled and seemed to laugh with me. I let the troublemaker go and started towards our island again.

We were almost there when Pepper and I heard something in the distance. It sounded like a whimper. I stopped suddenly and motioned to Pepper to be quiet. For a few seconds, everything was silent. Then I heard it again! A faint little whining, like a merbaby. It sounded off to my left, behind the iceberg I had just created for Pepper.

“Quick, Pepper! Climb on my back!” Pepper was all too happy to comply. He jumped onto my back and held onto strands of my hair like reins. Then I swam as fast as I could towards the sound, making sure that Pepper could still be above the water. Penguins can’t breathe underwater like I can. I have to be careful to remember that about Pepper. 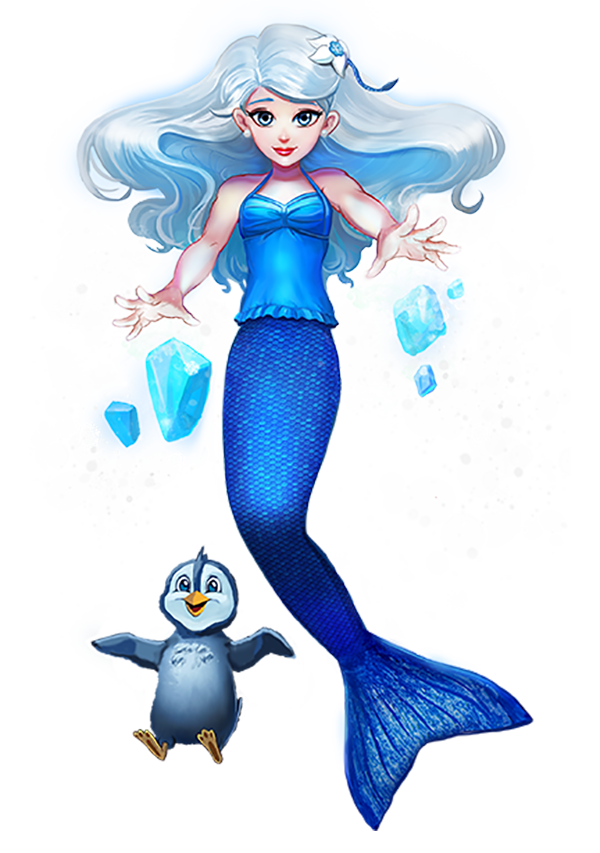 As I rounded the iceberg, the whimpering got louder. It was coming from a small bundle of white fur huddled on a little patch of ice about thirty meters away. I was curious! What was it? Then the little bundle cried again and the sound pierced my heart! I quickly covered the distance and flipped up onto the small iceberg. It tipped and wobbled, but it didn’t flip over.

All of a sudden, the little white shape lifted its head and I gasped when I realized what it was. It was a baby polar bear! What was such a tiny thing doing way out here? I scooped the little bear up in my arms and held her gently. I cooed at her and she stared up at me with sleepy eyes.

“Hush, baby girl. What’s your name?” I asked her gently. “I’m going to call you Snowdrop.” Snowdrops are flowers that I see sometimes. They are really beautiful and they grow during the winter. I looked around. “How in the seas did you get all the way out here?” Her mother wouldn’t just leave her here, I was sure of that! Where is she, I wondered.

“You must have been drifting on this ice for quite a while, poor little thing!” I murmured aloud, pondering what to do.

Snowdrop shivered and burrowed deeper into my arms. I gathered her closer and shooed Pepper away from where he had been trying to push his way into Snowdrop’s spot. Pepper gets jealous when I pay too much attention to anyone other than him. He’s such a silly penguin!

The tiny bear made that mewling noise again and I knew that she was calling for her mom. Polar bears that are this young should still be with their moms for a few more months at least! I held the furry little creature even closer and tried to decide what to do. As I cradled Snowdrop in my arms, I rocked back and forth and fluttered my tail under the water, which created a little icy whirlpool at the tip of my fins. Pepper was delighted and dove into the mini storm. He honked and swam around and around. I watched him in amusement.

Then I got an idea. I quickly stopped my swirling, to Pepper’s dismay, and flipped my fin to the other side of our little floating iceberg. I could see the coastline not too far away! Still holding my new little polar bear friend in my arms, I picked up my deep blue fin and swept it across the top of the frigid water. Right in front of me, a pathway of solid ice began to appear, racing toward the far-off snowy coast. I smiled, satisfied.

Snowdrop picked her head up again and watched the ice with curiosity. Then, she raised herself up on my lap and started to crawl warily toward the new path. I beamed when she took her first step onto the ice. She quickly started to run down the icy path with ease. I dove into the water and swam as fast as I could to keep up with her. She was fast! Pepper decided to slide on the ice path on his belly. He let out a high screech of excitement and I couldn’t help but laugh. 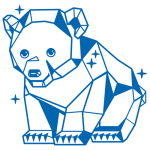 Finally, we reached the end of my ice. Our furry friend kept scampering forward. I raised myself up with my hands on the snow to see where she was going. Far ahead I saw a cave in one of the tall glaciers that stood in the rough terrain. Not many humans live here because it’s so cold. That makes it an ideal place for polar bears to live. They don’t like to live where there are a lot of people.

As I watched, a huge white head poked out of the cave. Then the rest of the momma polar bear came out. She was enormous! She was followed by two other little cubs, a little older than Snowdrop. When she reached her momma, Snowdrop launched herself into her mother’s white fur. I gasped and giggled in delight. Her little brother and sister bustled around her excitedly and tackled each other, rolling around in the snow.

Pepper and I sat there and watched the adorable scene for a while, then I let myself be tugged away by my impatient penguin friend and we swam to our island. You remember how I said my ice sculpting is like a painting? Well, I painted my best portrait yet that day. I squeezed my eyes shut and pictured everything as perfectly as I could. When I opened my eyes, I stared in astonishment as I saw a beautiful replica of Snowdrop leaping into her momma’s arms, and her little siblings lumbering around her, delighted to see their baby sister again.