I watched Scarlet swim back and forth across the large sleeping room as I lounged on the ledge by the window, holding Serena’s rainbow fish Picasso in my lap and stroking his fin. I glanced out the diamond glass at the others, who were playing a game that involved tossing around Cooper’s shell like a ball. The poor turtle was probably so dizzy by now he didn’t know which way was up and which was down! I laughed when Crystal dove out of the way to avoid the turtle shell streaking toward her, while Waverlee unsuspectingly turned away from talking to Jia just in time to catch the makeshift ball right in her stomach.

“Oh how could he do this?” Scarlet huffed as she flung herself onto one of the large cushions. “How can he refuse to tell me things that he learns about my own past! It’s selfish and arrogant and …”

“Hey,” I warned, silencing her with a look. “Don’t speak like that about Jia’s father. He’s doing everything he can for you. He’s been nothing but kind and generous. Besides, I trust his judgment and I think you should, too.”

Scarlet sighed and buried her face in her hands. “I’m sorry,” she muttered through her fingers and a few pieces of hair. “I just…I’m so nervous about this whole thing. And whenever Zoey looks at me, I just feel this overwhelming sadness and pity exuding from her and it makes me want to grab her by the shoulders and shake the reasons out of her!”

I paused, not sure if Scarlet’s odd choice of words was a mistake or a clue to something more interesting. I tried a subtle probe. “Wait, did you say you feel sadness coming from her?” Well…maybe not so subtle.

Scarlet went rigid, hands still covering her face but noticeable horror settling over her. She slowly lowered her trembling fingers to uncover her panicked expression, skin pale and eyes wide. “I meant…um…I didn’t mean…” she fumbled, her lips moving at a much faster pace than her voice. Then she slowly sunk farther into the down cushion, looking as if she wanted to melt into the floor. Her shocked and terrified expression remained even as I came to sit next to her, settling in for a long silence before she would be ready to talk.

The pause wasn’t as long as I expected, but several minutes later, Scarlet opened her mouth. “I was born with it. I’ve always felt it, even since I was a tiny child. My first memories aren’t so much involved with sight or sound or touch, but with emotion. It started out I could only feel the emotions of merfolk touching me or directly beside me. But as I grew older, my ability grew stronger. Soon, I could feel every person’s feelings within a hundred tail lengths away. I couldn’t stop myself. I felt the anger, the sadness, the excitement, the pain, the guilt, the fear. I felt it all. I didn’t know what was happening to me. I would run away and hide, covering my ears to try to block it all out. But I couldn’t. I asked my adopted parents about it but they didn’t understand.

One day, I was in school and the boy in front of me was pulling a younger mermaid’s hair. I could feel her pain. Two girls behind me were whispering about their friend. I felt the embarrassment of their victim who heard what they said. Then the teacher called on a student who hadn’t been paying attention. I felt his panic. Suddenly, it was all too much. I got up, threw myself out of the schoolroom, and started swimming away as fast as I could. I didn’t stop until I couldn’t feel them anymore, until all that was around me was a big blue ocean of nothing. Suddenly, I looked around and I felt free. There was no one to press their emotions on me, no one to even make me feel happy if I didn’t want to. It was my own happiness I was feeling and it was so much better.

“I grew to know that I wasn’t like normal merfolk and as long as I was near them, I couldn’t be free. I couldn’t feel my own emotions and decide what to do based on them, so I knew what I had to do. It was too hard to explain to the good merfolk who had raised me why I had to leave, so I left a note saying I was sorry and that I loved them and then I disappeared.”

I was distinctly aware that my jaw was hanging open, but the muscles in my jaw wouldn’t respond when I commanded them to shut it. I sputtered like a fish out of water for a few moments before Scarlet sighed. “I can feel your confusion and fear. I’ll leave if you want me to. Being around this many merfolk and all their emotions has been taxing anyway.”

“No!” I blurted out suddenly, causing her to jump a little. I giggled nervously before continuing. “No don’t go. I just needed a minute to process this, but I’m not afraid.” Scarlet looked at me dubiously and I corrected myself. “I’m not afraid of you, I mean. I’m afraid of what this means. Only royalty are born with gifts like ours. What’s going to happen if random merfolk across the ocean are developing powers? Not everyone would use their gifts for good, I’m sure of it.” I bit my lip, my mind flashing through the worst scenarios.

Scarlet sat up and grabbed my hand. “Destiny, promise me you won’t tell anyone about this. I’ve never told a single soul besides Cal, but I’m trusting you with this. Please,” her eyes held such a fervent plea that I didn’t even have to think twice. “Of course. I promise never to tell anyone.”

Her shoulders sagged like she’d been carrying a whale on her back and she had just now been relieved of it. I smiled at her and then returned to my spot by the window. In just a few minutes, I heard the slight bubbling that meant Scarlet had fallen asleep.

A few pieces of my hair twitched and then Frank came sliding down one of my long curls. I had forgotten he was up there, he had been so quiet! My funny little crab friend settled himself down on one of the decorative clam shells around the window. He closed his eyes and spoke like he didn’t care whether or not I’d find his words interesting.

“You know, mademoiselle, ze crab has not heard of other ‘random merfolk’ possessing gifts such as the princesses, other than the red one, have you?” I shook my head slightly, partly in answer to his question and partly at his nickname for Scarlet, which he used only because it irritated her to no end. “No,” I murmured softly, lost in thought. “No I haven’t.”

Frank opened one eye halfway and focused on me. “And even now King Takumi is investigating the possibility of a lost merkingdom, is he not?”

My insides began to churn slowly as I turned to look at Scarlet, curled up cozily on a cushion on the floor. No, I thought. That’s not possible.

“You said it yourself, Your Highness.” Frank yawned flippantly. “Only royalty are born with powers.” 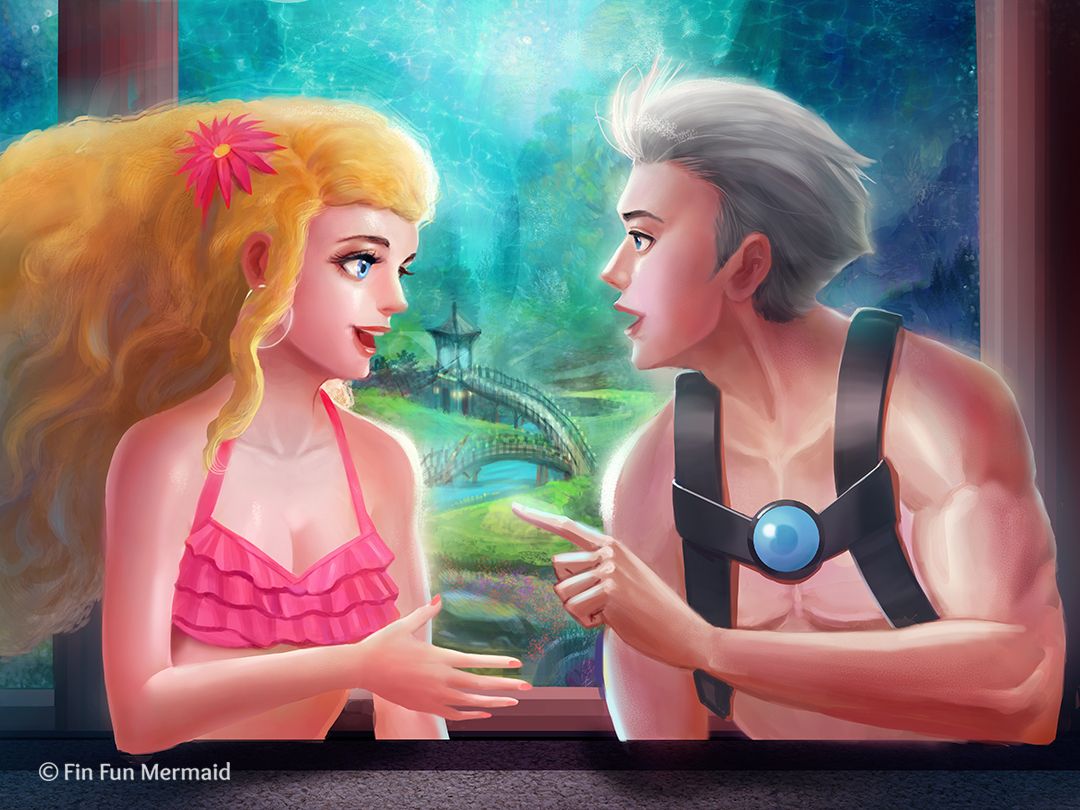