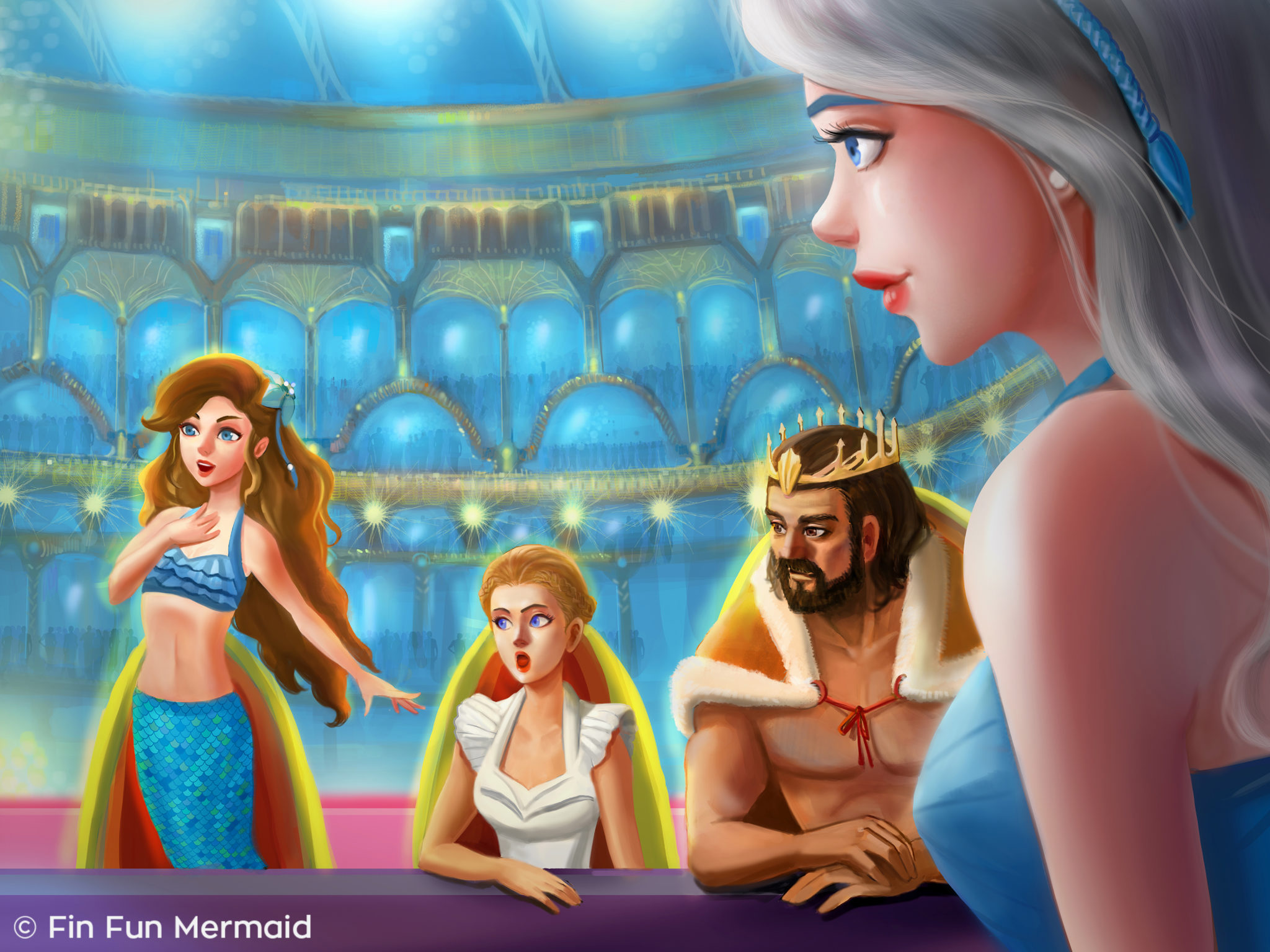 The words rang out in the silence of the dark, cavernous room and echoed back at us from all sides. Whispered conversations broke out over the entire table. The MerCouncil had just been called back into session to discover that their oldest member, Aldric, was missing. I fidgeted in my chair and tried to be patient while letting out the smallest sigh. Aldric was probably just in some important meeting or other. He’s very wise and seems to always be counseling merfolk, as he is highly sought after for advice. He has bronzed skin and deep wrinkles around his golden hazel eyes, especially when he smiles. He is very kind too, and always listens with a profound understanding to what each person has to say.

Brynn’s father King Murdoch arose with his humongous hands splayed on the table, leaning over them with gruff concern in his eyes. His question remained unanswered as the MerCouncil members barely paused their low conversing in one corner of the room. With an exasperated huff, the Celtic ruler dropped down into his seat and crossed his impressively beefy arms. Beside him, his wife and daughter sat with equally annoyed and impatient expressions.

I looked to my right at my father and noticed the tenseness in his folded arms as well. Compared to everyone else, my family is very pale. I tried not to notice it, but the fact that my hair is so white only adds to my obvious pallor. As I studied the bulging veins in my dad’s forearms, I felt my mom slip her hand through the crook of my elbow and pull me backwards so that my spine touched my clamshell chair. Her soft voice sounded close to my ear, “Lighten up, my gem. Don’t look so worried. You’ll get wrinkles.”

I looked over at her and she winked to let me know she was kidding about the wrinkles. I smiled as I relaxed myself to satisfy her. My mom’s warm smile shone on me and sent tendrils of calmness and assurance flowing through my muscles.

She always calls me her “gem” because once when I was small I asked why my twin brother Obsidian and I had been named after rocks. She had pulled me up onto her lap and told me that it was because crystals are precious gems and that to her, I was the most precious gem of all. That answer had made me glow with pride and love. Then she had said that Obsidian (or “Sid” as I call him) was named after a very strong, shiny black rock formed from volcanic lava flows, which is what my brother’s black tail reminded her of with its pointy scales and dark black shine. Oh, Sid, I sighed inwardly. Where in the oceans are you?  I could sure use one of your jokes right now. Thinking of my twin brother when he is away on migration with the orcas always fills me with longing and worry.

Sid is my twin, but my complete opposite in every way. I’m shy, he’s outgoing and fun. While I tend to worry, Sid’s not afraid of anything. I prefer quiet time alone with Pepper, and Sid seems to always want to be surrounded by others. Sid loves adventure and can’t stand to be in one place for too long. I prefer to stick close to home. I have power to make ice and Sid’s power is heat. He can melt anything. We couldn’t be more different, Sid and I. But we have a bond only twins can understand and I miss him terribly when he’s gone.

Now situated more comfortably, I surveyed the table again, hoping to distract myself from the anxiety I was feeling inside. Surely Aldric was alright, wasn’t he? But why wasn’t he here? He had never been late before. As questions bounced around in my head, the doors to the MerCouncil flew open with a boom. Everyone’s stare snapped to the entrance to watch Damon gracefully sail into the room with his arms spread wide. The light hit his tail at all different angles, making it appear deep blue, then grey, then a silky brown. I stared at the handsome merman and felt his gaze slide across each face in his audience.

“So sorry to interrupt,” he purred in his velvety voice, “but it seems that Aldric has been taken ill quite suddenly. You can’t imagine the toll the illness is taking on his frail old body, but I assure you, he tried his best to make it today. He simply couldn’t. Therefore, I find that it falls to me to fill his position, although I am positive I couldn’t begin to replace him. My only wish is to offer half the support and wisdom that Aldric himself bestowed upon this council.” With that, Damon made his way purposefully toward Aldric’s empty seat, which happened to be right next to Serena.

All was silent for a few moments after Damon’s declaration. Then Darek slowly rose from his seat again, eyeing the newcomer warily. He cleared his throat and began a long review of the topics of the last meeting. I tried to settle down and stop my heart from fluttering the way it was, frantic and out of control. It always seemed to do this whenever Damon was around. When I told my mom about it, she had smiled wisely and insisted that I had a new splash. My repeated refusal did nothing to convince her otherwise.

“Crystal, it’s okay to be interested in mermen at your age! Goodness knows I was. There was this one tall blonde I knew when I was a little older than you. He was dreamy!–”   I groaned then and shoved my head under a cushion from her bed. This only made her laugh and talk louder.

Is this attraction? I asked myself as I watched Damon from the corner of my eye. I didn’t think so. And if this is what having a splash is, I thought to myself, I’m not sure I want one. He makes me nervous and tongue-tied. That’s not the effect a splash should have, is it? A splash should make you happy when he’s around, and breathless. He should make you smile when you see him and laugh just because he wants to hear your giggle.  I looked up at Damon just as he leaned over to Serena and whispered something in her ear that made her smile. No. No this isn’t what a splash is at all.

“We’ll start with Mermaiden Crystal. Will you please share your thoughts on this proposal?” My eyes snapped to Darek. What?! Since when do we answer questions? What did he say? What proposal? My look of panic was probably written all over my face. I slowly swallowed and rose from my seat, twisting my hands behind my back. Just as I was about to open my mouth to admit my inattentive listening, Zoey burst out of her seat and began to clap.

“Yes, finally! Thank you, Darek, for letting our voices be heard on the subject of whether we, the Mermaidens, would be interested in a special position as ambassadors to the human world and whether we think we can handle it! Woohoo! Thank ya very much, sir!”

As Zoey’s hollering came to an end, she plopped herself down on her seat and looked extremely proud of herself. She winked at me with a toothy grin and I suddenly understood that the reason for the whole display was to make sure I didn’t make a fool of myself in front of everyone! Gratitude made my heart swell and I quickly lowered my head to hide my beaming smile. Then I straightened up and looked around the table, gathering my thoughts.

All of the sudden, the realization hit me. We Mermaidens are going to be ambassadors? To the humans? My heart started to beat a million miles a minute and my tongue dried up. The thoughts in my head vanished as my mind went blank.

I opened my mouth to speak.