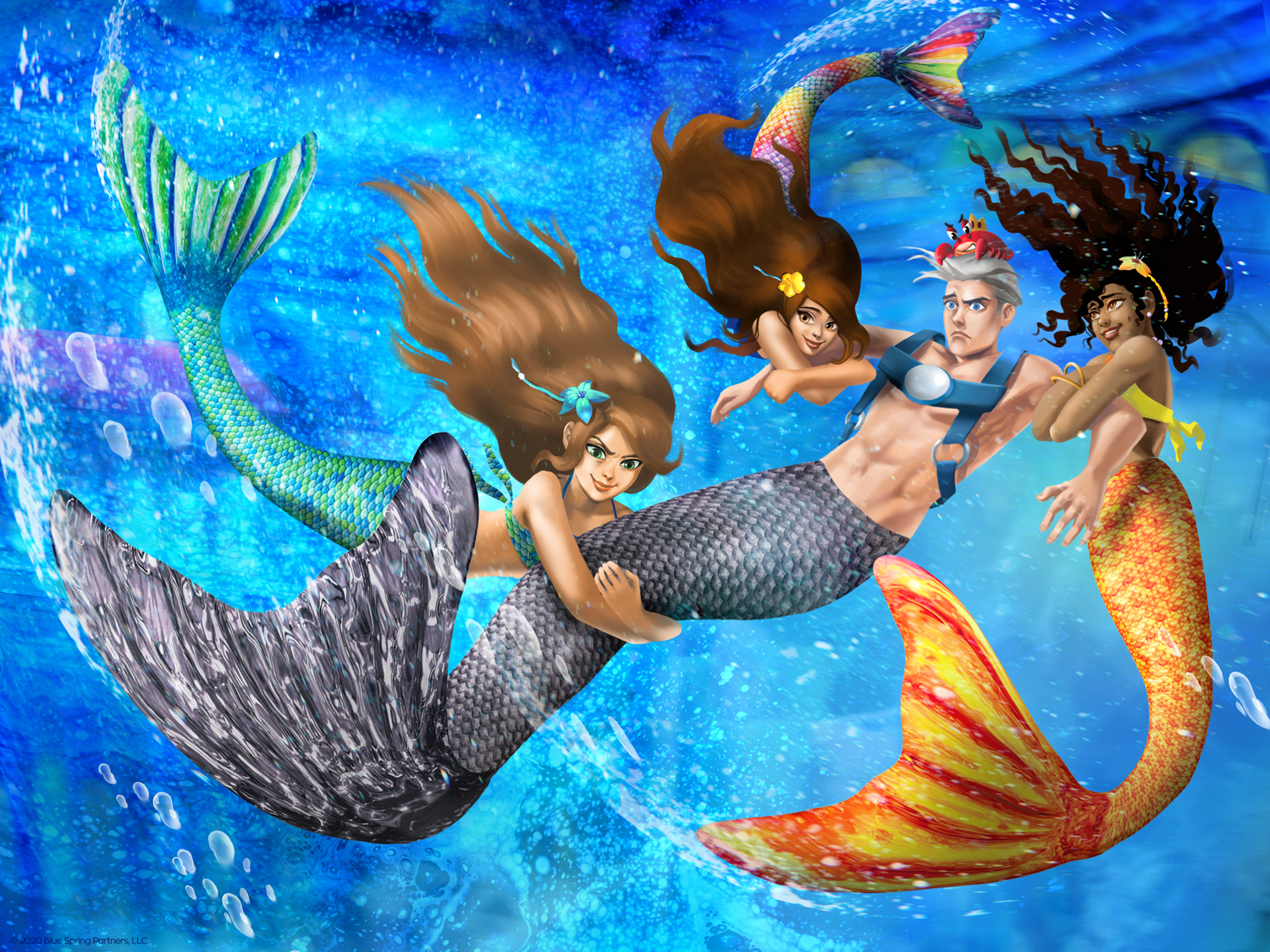 Minus Jia, my adopted sisters, Sid, and I all grabbed food from the kitchen and ate as we swam through long and winding halls. The bad news wasn’t far from my mind, but I wanted to have a bit of fun before we had to meet with the MerCouncil again.

“So, Siiiiiid.” I drew out his name and swam beside him, hands clasped behind my back. “How about we play a game, mate?”

The girls giggled while he eyed me warily and finished chewing his food. After a large swallow, he folded his arms over his chest. “Depends on the game, Your Highness. I’ve spent enough time around you to know you’re a devious one!”

That got everyone to laugh. Waverlee laughed the loudest and most high-pitched, forcing through her giggles, “He’s right, you know!”

I grinned at her and swam in front of Sid, then turned to face him. This caused him to stop, and the rest of the girls surrounded us. “As you know, Obsidian,” I used his full name knowing it would get a rise out of him, “We Mermaidens have learned to work well as a team. You’ve almost always worked alone, traveling with the Orca pods.”

Sid’s arms fell from his chest and he put his hands on his waist. A smug smile crept on his lips. “Now, wait a minute. I’ve fought along with you this whole time! What’s your point, Zoey?”

Unlocking my eyes from his and looking up, I mused, “Oh, I was just wondering if you could take on THIS!”

I threw myself at Sid and tackled him, turning in circles in the water and trying to pin him down. It only took a few seconds before the rest of the girls joined in and we were a mass of flailing tails. We were inches from pinning him onto the floor, when he shot out from under us with a burst of hot water from his flames.

He turned, the biggest grin on his face, and tried swimming away. But Waverlee knew exactly what to do. He didn’t make it far before a large wave brought him right back to us. I wrapped my arms around his tail so he couldn’t wriggle away, while the others latched onto him. Destiny had his left arm, Serena his right, and Brynn and Mariana went for his chest. Crystal crept up behind him and covered his eyes, and Waverlee used a wave to help us push him to the ground.

As soon as his back touched the floor, we lept away and cheered. “Oh, come on,” Sid moaned, “seven against one isn’t fair at all!”

I swam close again and tapped a finger against Sid’s nose. “But Sid, you just proved a point for me. You’re strong on your own and nearly got away! But with everyone’s help, we got you! I feel better about our teamwork because I didn’t have to ask the others to help. They knew exactly what to do!”

“And you’re pretty strong, Sid!” Crystal chimed in, patting his shoulder and smiling fondly. “We can take on Damon today if he tries anything.”

“We also have our gems to enhance our powers!” Serena reminded us.

Brynn stretched out her arms and smirked. “Besides, a little fun every now and then keeps me from worrying too much.”

The rest of us nodded. Mariana lowered her voice so no one nearby would overhear. “Well, are you ready?”

We all fell silent. Then, there was mumbling. “Ze crab has never been ready, and ze crab disapproves of each of your actions.”

We all turned to Destiny, who was trying to calm Frank down. He had slipped out of her hair and was glaring at each of us.

“Sorry, François.” I kneeled down next to him. “We’ve come this far, and we can’t turn back now.”

Destiny sighed. “Frank, you know you didn’t have to come here with me. Now, you can either come with us to see Damon, or you can wait here for us. It’s up to you.”

Frank tapped his legs against the floor and thought for a moment. With a long sigh, he said, “I’ll come, but I am not happy about it, mademoiselle. Not happy at all. You will take me treasure hunting every day for a year when zis is over!”

Destiny smiled and held out a hand so Frank could scurry back up to her hair. “You’ve got a deal.”

As he settled into her black locks again, I heard Frank speak so softly, I almost missed it. “Please be careful, mademoiselle.”

I made eye contact with Destiny, knowing that she would have been the only other one to hear it clearly. She gave me a tight-lipped smile that proved she was nervous. I touched her hand and smiled back.

“Okay,” Mariana gathered us closer so she wouldn’t have to speak up. “We won’t have much time before they expect us back in the Council room, so we’ll need to be fast. Serena, can you camouflage us again so no one sees us?”

She nodded, and I watched in awe as a rainbow of colors formed at Serena’s fingertips. “There’s only so much I can do, so stay close to the wall. Others will see us if we swim out in the open.”

We each waited patiently as Serena painted each of us and then herself. Before we started creeping forward, Crystal whispered, “Wait!”

“What is it?” Sid whispered back.

“There’s probably a guard at the door. How are we supposed to get past him?”

“Don’t worry, lass. I’ll send a ball of light at him, so he won’t even notice the door opening and closing.”

We swam as silently as possible, staying close to the wall as Serena suggested. When we approached the guard, Brynn sent her ball of light out. The guard responded just as we’d hoped, covering his eyes and letting out a yell, allowing us to slip past him. Just before closing the door, she sent a second ball of light down another hall to distract him.

“Phew!” I exclaimed to the group, letting out a chuckle.

“Well isn’t this a surprise. Had I known the Mermaidens would be joining me for lunch, I would have prepared for it.”

Our giggles died and we all turned to Damon as he spoke. He wore a confident smile as he held his seaweed sandwich. I can’t quite describe it, but something about the way he looked at us made me uneasy. I wanted to slap that smile off of his face.

Damon shrugged and looked away from us to take another bite of food.

Mariana came to the front of our group. “Damon, we know there’s information you’ve been hiding from us. Tell us what you know about Calisto, her plan, and your role in it.”

The silence was painful as Damon continued to chew. Sid looked at the rest of us, “How long do we have to wait?”

I shrugged and looked at the others. Brynn thought for a moment before moving closer to Damon. “For someone who claims to want the best for the MerWorld, you sure have a hard time showing it.”

Damon swallowed and sighed, rolling his shoulders back. Putting down his food, he turned to us. “Because you don’t understand the position I’m in.”

Mariana gritted her teeth. Apparently I wasn’t the only uneasy one. “You’ve already betrayed Calisto though—”

Damon stood. “Do you think she cares? She’s manipulated me with her power my whole life!” It was unusual hearing him shout when his voice was normally so smooth. He sighed again and lowered his voice. “Imagine growing up knowing that your mother only wanted you so she could use you as a tool. I have never been myself. I have always done what she wants, whether I wanted to or not.”

Mariana’s shoulders sagged. The rest of us didn’t have her power of empathy, but it was easy to feel his sadness. “I… I’m sorry, Damon.”

He clenched his jaw for a moment, then relaxed it. “I don’t tell you this so you’ll have pity on me. I’m telling you this so you can understand that I truly do want what’s best for the MerWorld. Though it wasn’t my decision to become Aldric’s apprentice, I enjoyed every moment learning from him. He was wise and kind… something I never saw from either of my parents.”

Crystal’s eyes dropped to the floor. “Damon, I want to apologize for my hurtful comment back when we first met. I said that your family must miss you terribly without realizing how much hurt you’ve endured from them.” Sid placed a hand on her back to comfort her.

Damon sighed. “You didn’t know, Mermaiden Crystal. I’m not offended. Besides, my father was manipulated by Calisto’s power too. I imagine he would have been as great a father as MerKing Caspian had he not been twisted by my mother’s magic.”

“Speaking of your father,” I added. “Where is he? He promised to help us when we freed him from Calisto.”

“Gone. The council allowed him to leave in search of additional information. I don’t know when he’ll be back.”

There was silence for a moment, then Brynn spoke. “You mentioned MerCouncilor Aldric. Damon… where is he?”

The rest of us stiffened. All we knew was that Adric was missing and presumed dead, but no one had any evidence of it.

Damon averted his eyes and sank to the floor. He brought his hands up to hide his face from us. “Mermaidens… Obsidian… you’re asking a question that you don’t want the answer to. My mother is a horrible, demented person. What I’ve done… is unforgivable. Please don’t hate me for what she made me do.”

Horror filled my whole body, and I felt like I was plummeting to the bottom of the ocean. No… he didn’t. He’s just a kid, like us. There’s no way—

Mariana spoke in a low voice. “You’re right. We don’t want to know, but we have to… However, our time is up.” She looked at the rest of us, and the rapid sinking feeling dissipated. “We need to leave before we’re found out.” She glared back at Damon one last time. “This conversation isn’t over. I suggest you figure out how you’re going to tell your story.” 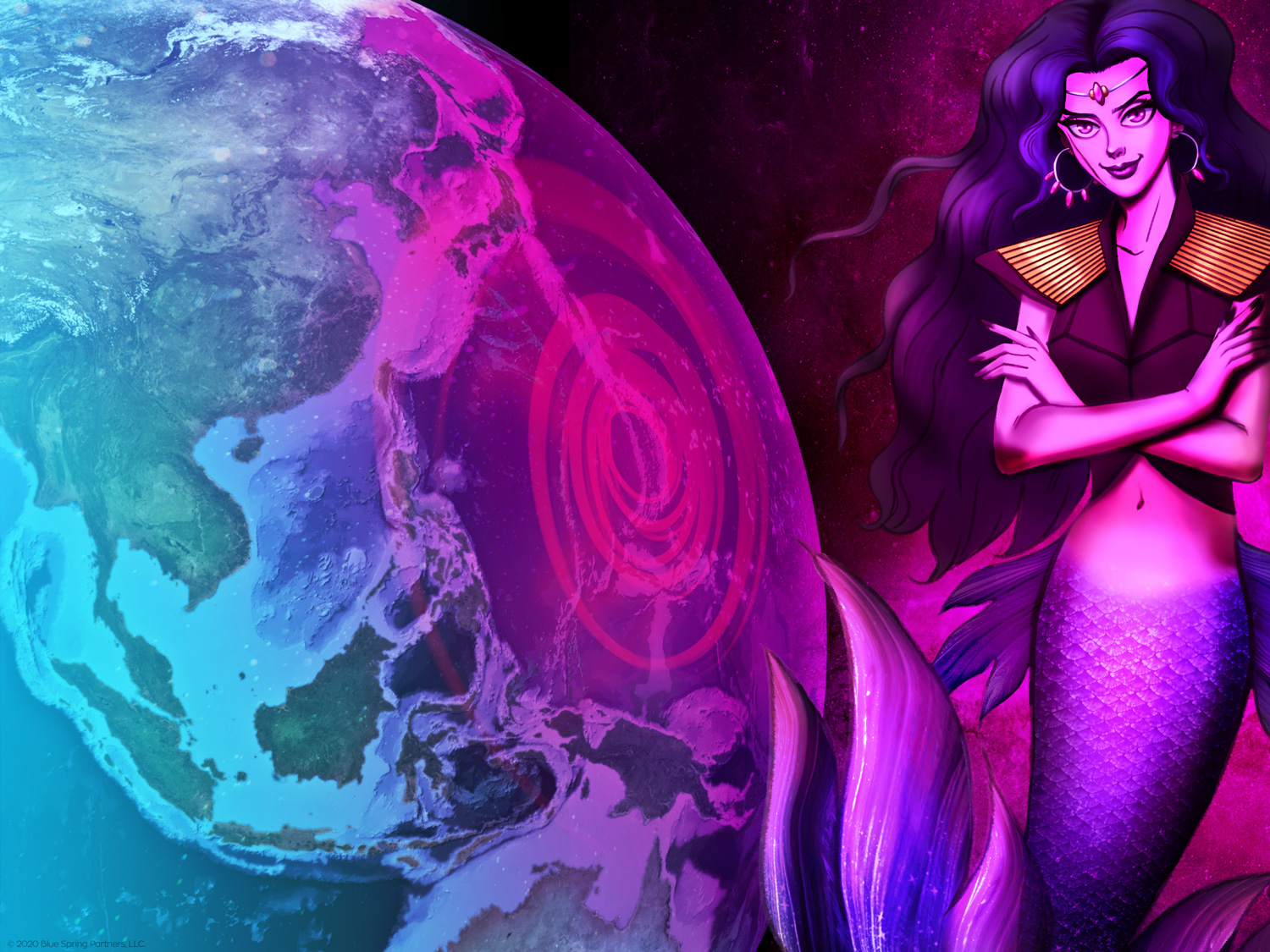 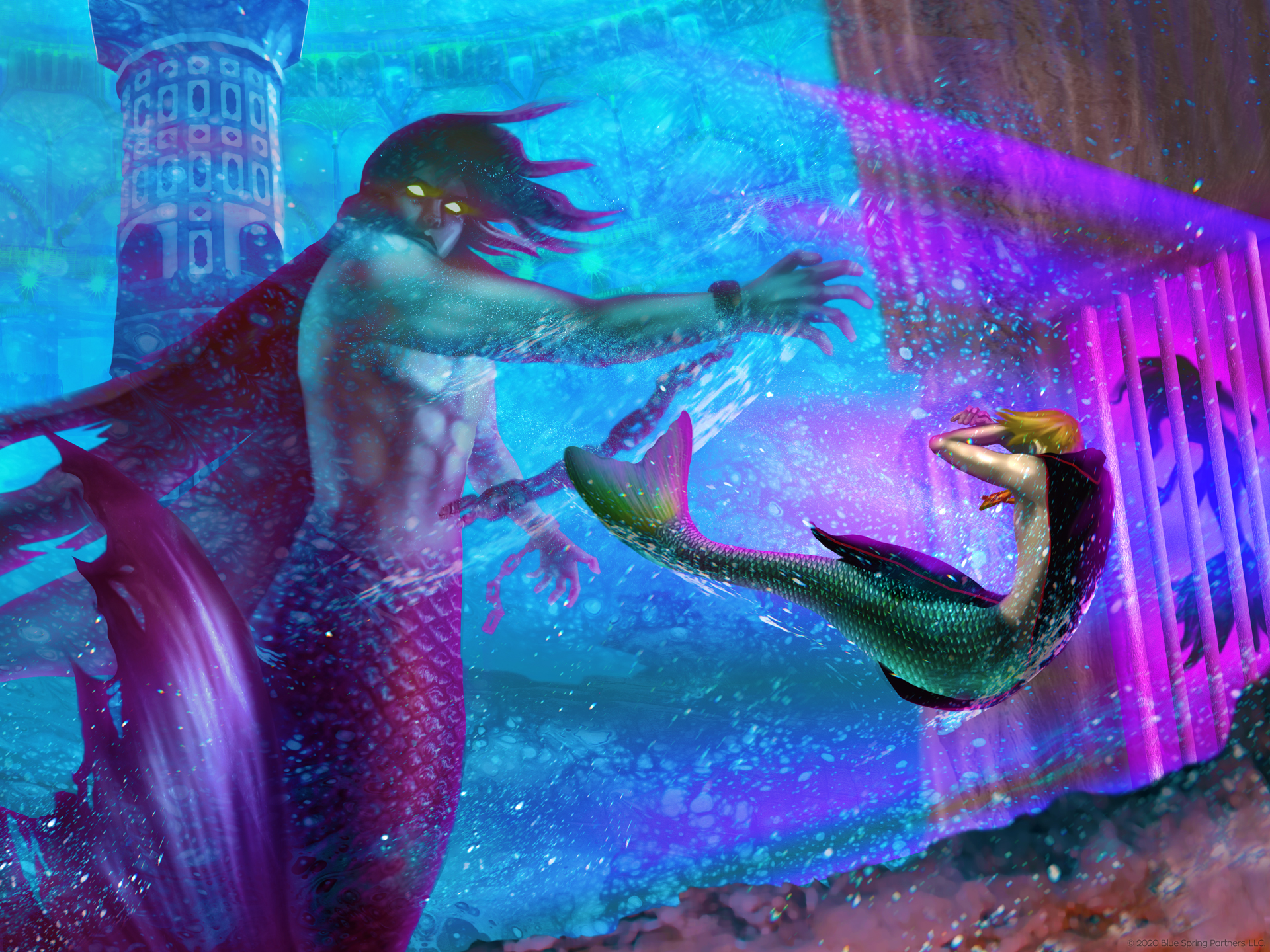