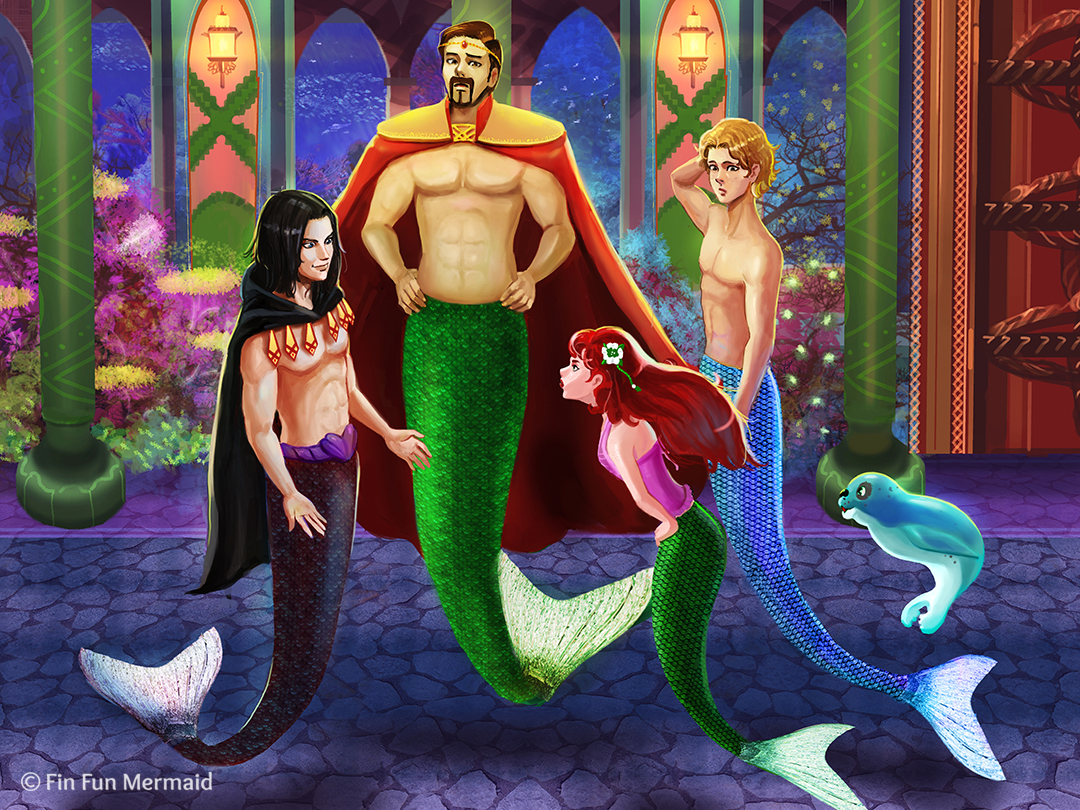 I could see the sun through my eyelids, the light transforming the usual black to a red cloud that enveloped the darkness. I turned my head and peeled open my eyes to have a look at Finn. The poor fellow had fallen asleep! Ha! He’s going to regret this. I was nearly giddy with excitement.

I looked around, surveying the beach for anything of use. Fergus was asleep a little farther away, snoring softly. Just then a new wave rolled in and brought something pink and spiny with it. l stared at the giant starfish that had just attached itself to my tail and slowly smiled. Perfect.

Finn began to shift beside me. In one swift movement I detached the starfish and flung it directly onto his face.

He shot up with a muffled gasp and clutched at the starfish, who seemed miffed that he had been thrown, but not all that averse to his new home. The pink sea star clung on for all it was worth, while Finn tugged and yanked at each of the spindly legs. I bellowed with laughter, loud enough to wake Fergus who immediately began to bark and yap at Finn and his new fishy friend. He came flopping towards us, tripping over himself in his excitement. I gathered my wee little seal in my arms and we watched Finn for a moment before finally taking pity on my shrieking friend.

“Go get it, Fergus! Get the starfish!”

Fergus leaped at Finn and pinned him under his blubbery body as he took hold of the moody starfish and pulled it off with one great shake of his head. Then he ambled off with his prize while Finn lay back down on the sand, panting and open-jawed. I was shaking with silent laughter but slowly I reached over to pat his shoulder. After a few minutes of quiet I decided it was probably safe to talk, as I had had time to control myself and Finn seemed to have recovered somewhat from his terror.

He raised his hand to stop me.

“Come on Fi—“ Another stop sign. I bit my lip to keep from laughing.

In painstakingly slow motion, Finn sat up. He shook the sand out of his long brown curls and turned to me. “You, my darlin’, are the evilest old sea hag I’ve ever met.”

I tilted my head with a smug smile. “Thank ye kindly.”

With a shake of his head and a grunt of laughter, Finn turned his happy blue eyes on me with a mischievous look. “Ye know this’ll mean war, lass?”

With a wicked grin, I narrowed my own deep green eyes and leaned closer to him. “I was countin’ on it.”

With a flick of his hand, Finn sent a handful of water into my face and then zipped back into the surf. “Quick Fergus, we can’t let him beat us!” I yelled as I plunged into the salty Celtic Sea. The three of us raced back home, weaving our way through swarms of fish, around rock pillars and in and out of caverns. We were fin and fin the entire time until just at the end, when Fergus somersaulted ahead. “You go on without me. Save yourself!” Finn yelled at me just as he lunged forward and wrapped himself around Fergus. I swam faster and faster until I burst through the front doors of our rock palace. A few seconds later Finn slid to a stop next to me, still holding Fergus who, instead of playing the blood thirsty monster he was supposed to be, was licking Finn’s nose and chewing on his hair instead. Tears of laughter filled my eyes as Finn pushed himself up and brushed himself off, shaking his head at wee little Fergus.

“I don’t know how you do it, silky. You are incredible. I really thought I was being eaten alive there for a moment!” Fergus looked at him adoringly and nibbled one of his fingers before swimming laps around my tail.

Chuckling, we both turned to go up to my room, when we realized that we had an audience. My father stood stoically next to a tall, dark, handsome merman with a sly smile on his face.

“Damon?” I asked in shock and a little irritation. I thought I’d be free of that flirt for a long time to come. It had only been a few months since we had returned home from the MerCouncil. “Why are you here?”

“Brynn,” my father said in a warning voice. “Damon is here on the MerCouncil’s business. He is to visit with each of the ambassadors every so often to observe them in their duties and report back to the Council members. I expect you to show him complete cooperation and consideration during his visit.” My Da’s eyes flashed, which let me know he was dead serious. I glanced over at Damon, who looked a little more arrogant than I remembered him being. I gritted my teeth. “I understand.”

“Good. I’ll leave you two to it then.” Da turned to leave. “Finn, I’m going to need help with the palace carving today. How about you come with me now?” It wasn’t really a question as much as a command.

Finn looked at me and I could see his eyes dart to Damon for half a second. If I gave him any sign that I wasn’t comfortable being alone with Damon, I know Finn would have stayed in a heartbeat, no matter the consequences from my father. Finn had been raised in the palace alongside me, since his mother was my nursemaid. He had found work here when he developed a beautiful talent for carving stone, which my father put to good use. My father respected him, even liked him I thought, but I knew he wouldn’t put up with anyone disobeying his demands. I smiled, grateful to know that Finn was so loyal, but sure it wouldn’t take me long to slip through Damon’s slimy grasp and find Finn later to help me escape from my unwelcome visitor. I nodded at him to go.

“Of course, King Murdoch,” he said, as my father clapped Finn on the back and they strode off with my Da’s arm around Finn’s shoulders.

“Let me begin by describing to you how stunning you look this morning, Princess. Your fair skin is most luminous in whichever light chooses to grace it—“

“Yes, yes, let’s get going before you take a half hour to depict the knots in my hair as wee little fish in a red sea.” I rolled my eyes at him and only got a delighted smirk in return.