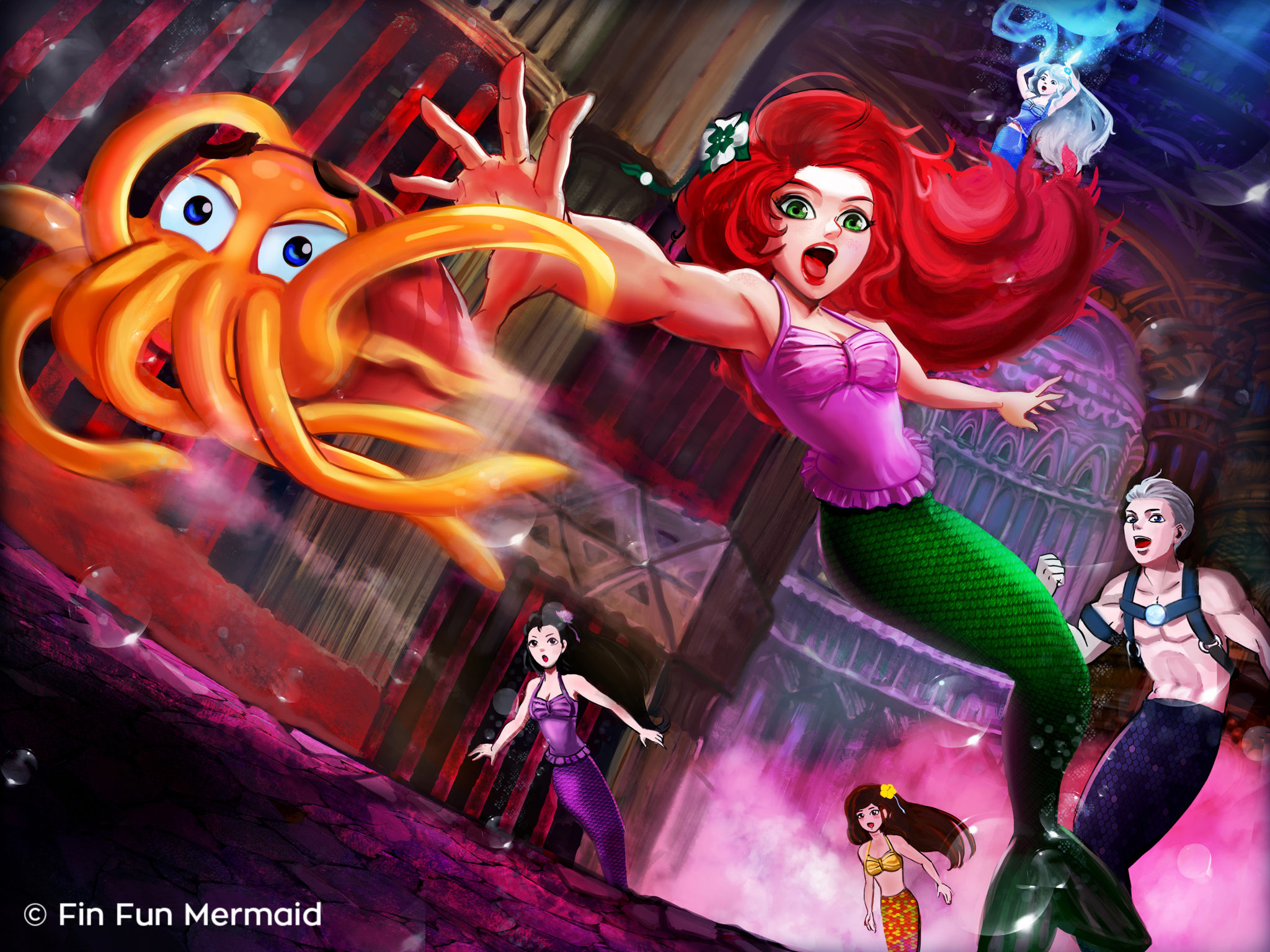 As we stood watching the heartwarming scene of a reunited father and daughter, a muffled sound from behind me caught my attention. It was strange yet familiar, a sort of gargling noise that didn’t belong in a place like this. I turned slowly to scan the room but found that it was completely empty aside from our group. Just as I began to turn back, a slight disturbance in the water about three cells down caught my eye. It was only a shimmer, a vibration that could very well have been caused by nothing more than a warm patch, but something about the sight and the sound together reminded me of something…or more accurately, someone. 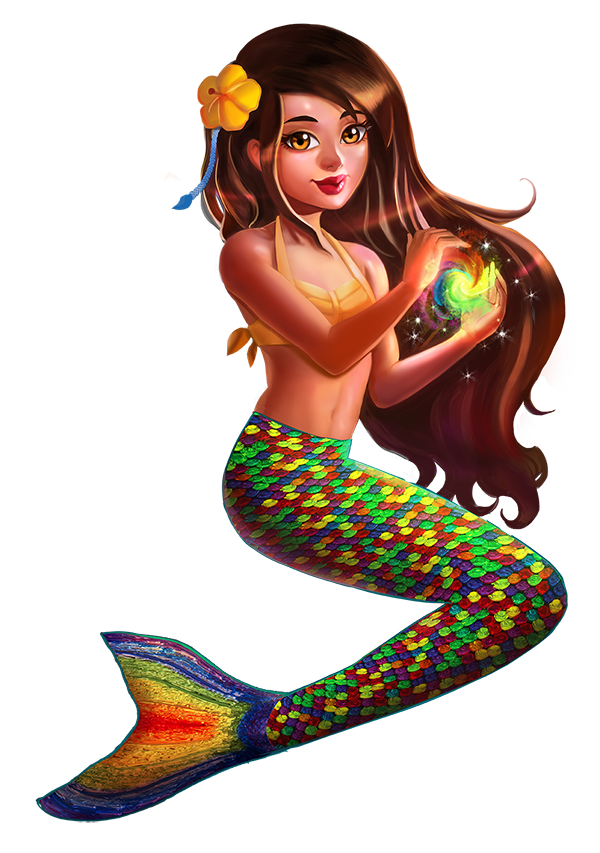 With an over-exaggerated shrug, I turned back to our group and nonchalantly sidled up next to Serena. The sweet girl sniffled a little as she watched Scarlet bury herself in her father arms. She smiled at me when she found me at her side. “Isn’t it beautiful to see families being reunited? It’s like watching someone find a piece of themselves that they know has been missing.”

I nodded distractedly, having a hard time appreciating the artist in my friend while I knew the very real danger that lurked behind us. “Yes very bonny,” I said. “Lass I need you to do something. Behind us is a nasty little creature that has the potential to get us all into a whole world of trouble. No don’t look just yet!” I added quickly, praying that the little demon didn’t suspect anything. “Okay, when I give you the signal, I need you to do something with your colors to make him visible. Right now he can blend in to just about any surrounding he wishes so I need something bright and eye-catching, can you do that lass?”

Serena nodded carefully. “I think so, just give me a minute to get ready.”

“Don’t worry, lass. You just show the little bugger off and I’ll do the pouncing. He’s not too quick, but he’s a slippery devil so we’ll have to be fast.”

She nodded and then took a deep breath. “Alright, let’s do it.”

On the count of three we spun around, and like a frightened octopus’s inky mist, a bright pink cloud surged out of Serena’s fingertips. In a matter of seconds the entire room was cloaked in the ridiculous color, leaving an extremely confused and wide-eyed cuttlefish hovering not too far away. As quickly as I could, I dashed forward and grabbed at the slippery little fellow, but somehow Noodles evaded my lunge. He slipped through my arms and, moving suspiciously fast for such an odd looking creature, made a beeline for one of the empty cells on the opposite wall. There was a commotion as I once again took up the chase, while the others either swiftly moved out of the way or went to grab him themselves. Obsidian caught hold of one of his tentacles for a moment and Jia’s tail provided a momentary block but it seemed that, before I could blink an eye, the devious cuttlefish had nearly made his escape. My stomach sank as I desperately tried to reach the cell before Noodles, a small distance that suddenly transformed into an entire ocean’s length.

A flash of white stopped us all in our tracks. Noodles froze, literally, just before the cell, lying on his side in a block of ice the size of my head. All eyes were slowly drawn to Crystal, who stood not too far away with a smile creeping across her face. “Got him,” she said nonchalantly.

Obsidian gathered the iced cuttlefish and quickly melted his sister’s ice. Noodles lay quivering on the ground, dramatically sobbing and bubbling through his face full of tentacles. Rolling my eyes, I knelt beside him and dragged him upright. “Alright listen up, ya wee devil. We have some questions and you’re going to answer them. I know you spy for Damon. Where is he and why does he care what we’re up to?”

Noodles angrily blew bubbles at me in indignation. “You think I will give away my master so easily? You offend me!”

“Oh give it up. We both know you’re not loyal to Damon. You can be swayed as easily as the flag at the top of a mast in a gale. Tell me what I want to know and I promise we’ll protect you from Damon.”

The cuttlefish seemed to weigh the options carefully, eyes showing intrigue with a touch of amusement. “If you think Damon is the one I need protecting from, you know nothing. Damon is only a pawn, a weak one at that…but protection is what I desire. I will tell you what you wish to know, if you all ensure my safe passage out of this kingdom.”

I nodded in relief. “We will do all we can to help you. Now tell us what you know, creature.”

“Damon doesn’t know that you’re here. He didn’t send me to follow you because he didn’t need to. He was already here.”

“What do you mean?” Obsidian prodded when Noodles paused. The cuttlefish obviously relished in his dramatics.

“I mean,” he continued with a sly smile, “Damon visits this place often. He might even call it somewhat of a home.”

“But Damon is a MerCouncilman,” Serena pointed out. “His home is with the MerCouncil.”

“Not quite. You see, Damon was chosen to be a Councilman, just not as…let’s say… fairly as the others. You remember MerCouncilman Aldric? Well it seems the old man wasn’t as loyal as one may think. Instead of relying on the appropriate testing, he took Damon in to be his apprentice at the request of the boy’s mother.”

“Why would he do such a thing?” I demanded, all the while untrusting of the coy cuttlefish’s story.

“Oh Damon’s mother can be quite persuasive. But don’t take my word for it. Talk to her yourself. Although you may know her by another name…Calisto.”

The name sent shivers down my spine. I squeezed my eyes shut tight and tried to ignore the panicked whispers that erupted around me at the news. Damon was Calisto’s son? Things began to fall into place as every encounter I’d had with the faux MerCouncil apprentice flashed before my eyes. I took in a shaky breath and opened my eyes to glare at Noodles, who looked much too satisfied with himself. “Okay vermin, ye’ve had your fun. Now tell us how the sea witch controls minds and how we can beat her.”

Noodles scoffed. “I very much doubt that you and your friends have the power to beat Calisto, even eight against one. But it would be amusing to watch you try… very well I’ll give you some tips. Calisto is powerful, but even her power has its limits. In order to be able to keep the minds of all of the soldiers in the kingdom under her control, she had five gemstones made which act as enhancers for her power. Supposedly, if they were to be smashed, all of the pressure of the mind control would be placed back on Calisto. This would either weaken her sufficiently for even you and your friends to overpower her, or it would force her to break her hold on her army.”

Surprised at the simplicity yet efficiency of this possible solution, I thought for a moment. Could we actually trust the slippery little beast? His very nature was to deceive, but something told me he would have more to gain from telling us the truth.

I straightened and looked around at my friends whose faces ranged from excitement to anxiety to fear. “Well, you lot heard him. It seems to get out of here, we’re facing down a dangerous witch and her army of brainwashed muscle men. What’s our best bet?”

Scarlet spoke up. “If what the strange little fish is telling us is true, it sounds like we’ll have to split up. One group of us should try to find the gems that are enhancing Calisto’s power and dispose of them. That will weaken her hold on her army, which we can then use to outnumber her. The others should go try to catch that sea wench off guard while the element of surprise is still on our side.”

“Sounds like a solid plan to me,” I nodded at her in approval. “Although you’re forgetting about your father.”

Caspian had his arm slung round Obsidian’s shoulders but his head lifted at the mention of himself. “Don’t worry about me, young lady. I’ll keep up in any way I can. Besides, you’ll need me to guide you.”

“No Father,” Scarlet said sternly. “I’ve only just found you. I won’t be losing you any time soon. If you can just tell us how to find Calisto and where she might be keeping her gemstones, we’ll take care of the rest.” She turned to Jia, pleading, “Please stay with him. You still have need to rest yourself and you can help him if he falls ill. Please…”

Nodding, Jia went to help Obsidian lower Caspian to a sitting position. “Of course,” she said. “I’ll make sure your father is alive and well when you return.” The grizzled old king looked less than pleased with the arrangements, but he held his tongue if only, I guessed, to please his new found daughter.

“Now that that’s settled, we need to decide on the groups.” I studied the faces around me and quickly made up my mind. “Scarlet, Waverlee, and Zoey come with me to distract Calisto. The rest of you, do your best to find and destroy the stones. Once you finish that, bring all the guards you can to help us beat the witch. We can do this, lasses.”

I took one last look at my friends as Destiny, Sid, Crystal, and Serena all turned to leave. Then I squatted next to Jia and patted her shoulder. “We’ll be back in no time at all, so just sit tight.”

Oh we’ll all come back alright, I thought with a queasy feeling in my stomach, but I doubt we’ll all be the same when we do. 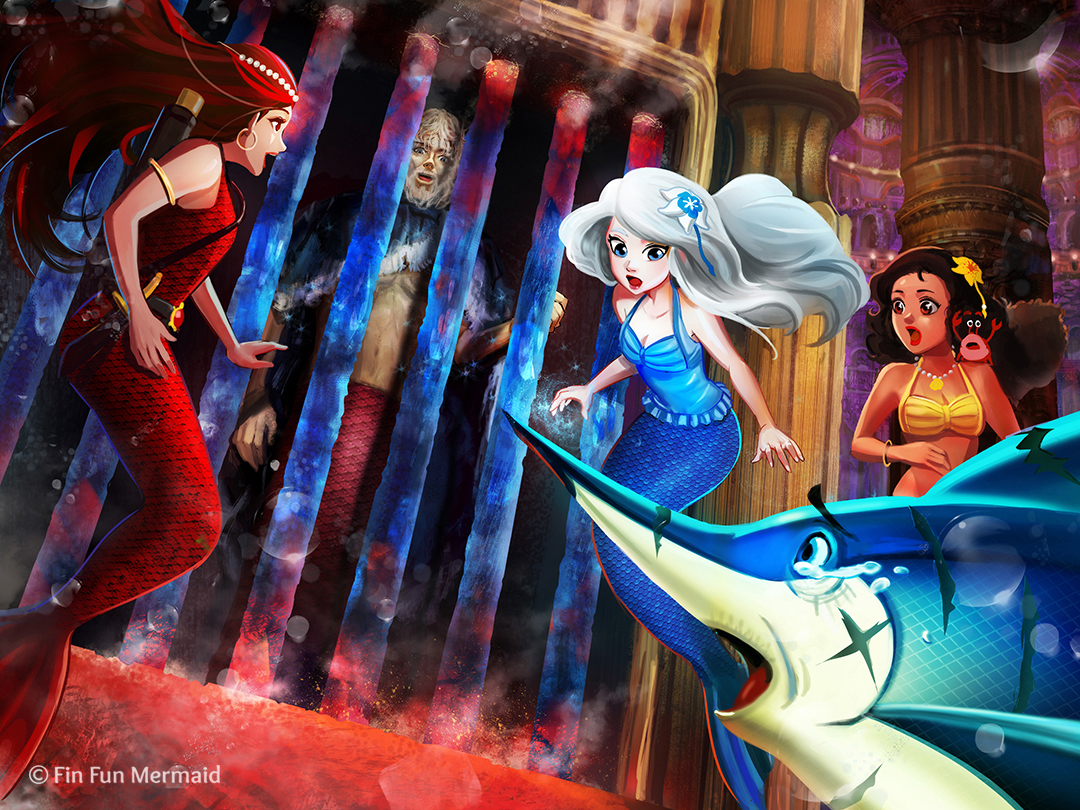 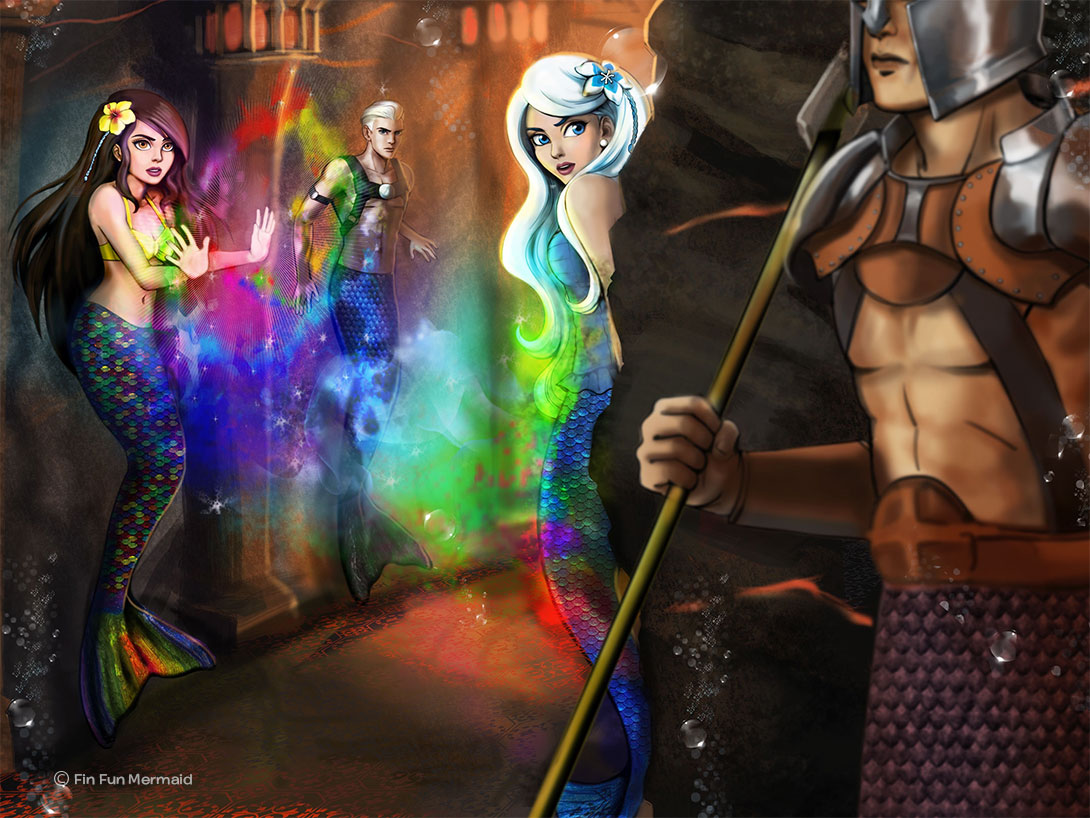